The UN Climate Change Conference (COP26) was held in Glasgow from November 1-12, to further the goals of the UN Framework Convention on Climate Change (UNFCCC) and negotiate the implementation of the Paris Agreement which aims to keep global warming to below 1.5C.

Peace Boat co-organized and participated in several side events throughout the conference in the UNFCCC administered Blue Zone. In the first week, at the Nature+Zone Pavilion, Peace Boat and Ecoship Founder and Director, Yoshioka Tatsuya spoke on a panel focused on the Green Economy which covered a range of topics including climate finance and renewable energy. Stressing the need to rapidly decarbonize the maritime sector, Yoshioka Tatsuya introduced Peace Boat’s Ecoship as a transition model, saying, “The technology is available, why are we using 100 year old technology for shipping”?

Ecoship was featured in another event at UN DESA’s SDG Pavilion which focused on SDG13 (Climate Action) and SDG14 (Life Below Water). Nathalia Lawen from Seychelles, who joined Peace Boat’s Ocean and Climate Youth Ambassador Program, spoke about the importance of connecting youth from Small Island Developings States (SIDS) on the front line of the climate crisis. Nathalia said, “even though we are all physically distant, we are all connected by the ocean”. Peace Boat was joined in this event by Oceanic Global who emphasised the role of the oceans in climate change mitigation and March for Science who spoke about the need to follow science based recommendations. 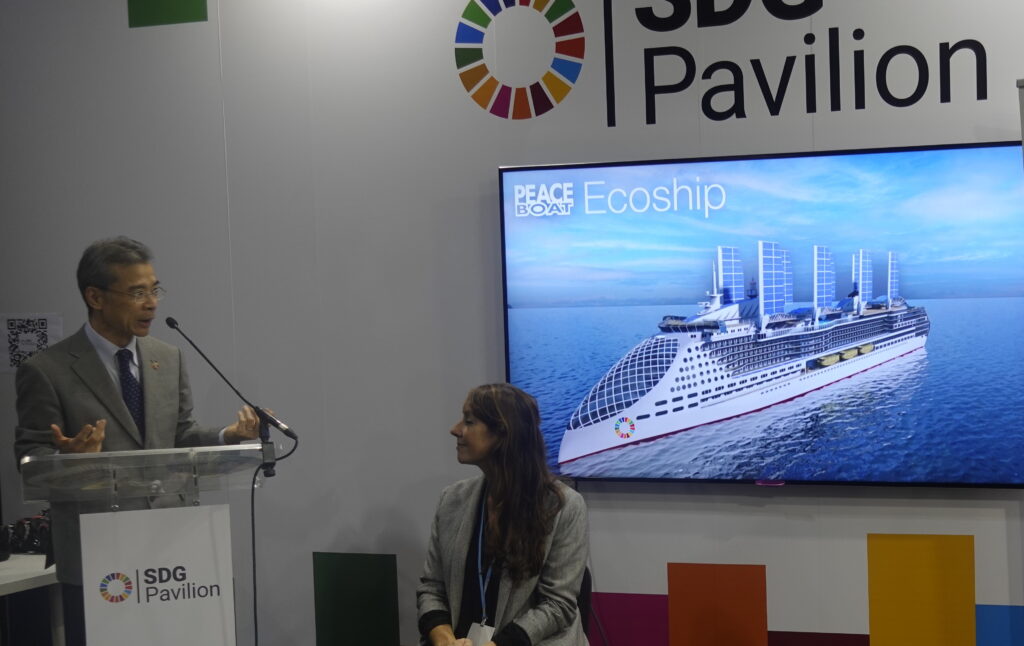 On the penultimate day of the conference, Peace Boat held its last side event “Connecting Large Ocean States for Climate Action and Youth Empowerment” in the Alliance of Small Island States (AOSIS) Pavilion featuring presentations and a discussion between three youth leaders from islands on the front line of the climate crisis. Speaking about the importance of including youth, Kim Allen from Papua New Guinea, said “Youth Innovation and creativity is a potential for world leaders to tap into, for them to realise the potential.  Youth are very creative, very innovative and they are active in the space of advocacy and actually doing the work”.

Epeli Lalagavesi representing the Alliance for Future Generations – Fiji, a partner with which Peace Boat has organized programs together on climate action in Lautoka, Fiji used the analogy of the Uto ni Yalo (‘Heart of the Spirit’), a ‘vaka’ or traditional Fijian sailing vessel on which Epeli sails to coastal communities on the front line of the climate crisis. “The vaka is a symbol of hope for the Pacific Islanders, a symbol of our voyage or journey – where we were, where we are and where we want to go”. He explained that elders are at the stern rowing while youth navigate. “And that to me is how we should voyage forward with young people at the front to navigate”.

Ms Charlene Mersai, National Environment Coordinator and representative of the government of the Republic of Palau, gave opening remarks at the event which also heard from Brandon Levy of the Sustainable Ocean Alliance and Leo Rogers of the Blue Planet Alliance.

Outside of the Blue Zone, Peace Boat also worked with partners including Blue Planet Alliance and EarthX on several side events in the city of Glasgow which saw the COP26 premiere of the new “Don’t Choose Extinction” UNDP signature campaign in a conversation with UNDP Campaign Executive Producer Helen Trickey.  In addition to programming in Glasgow, Peace Boat had a booth online featuring Ecoship for the duration of the conference at the COP26 Virtual Ocean Pavilion.