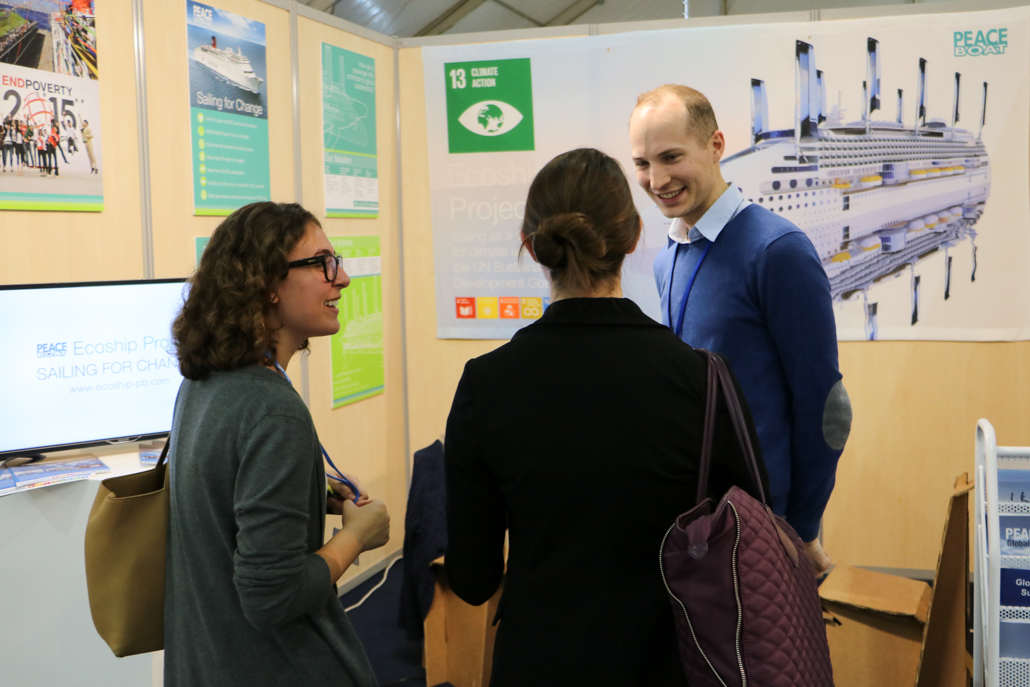 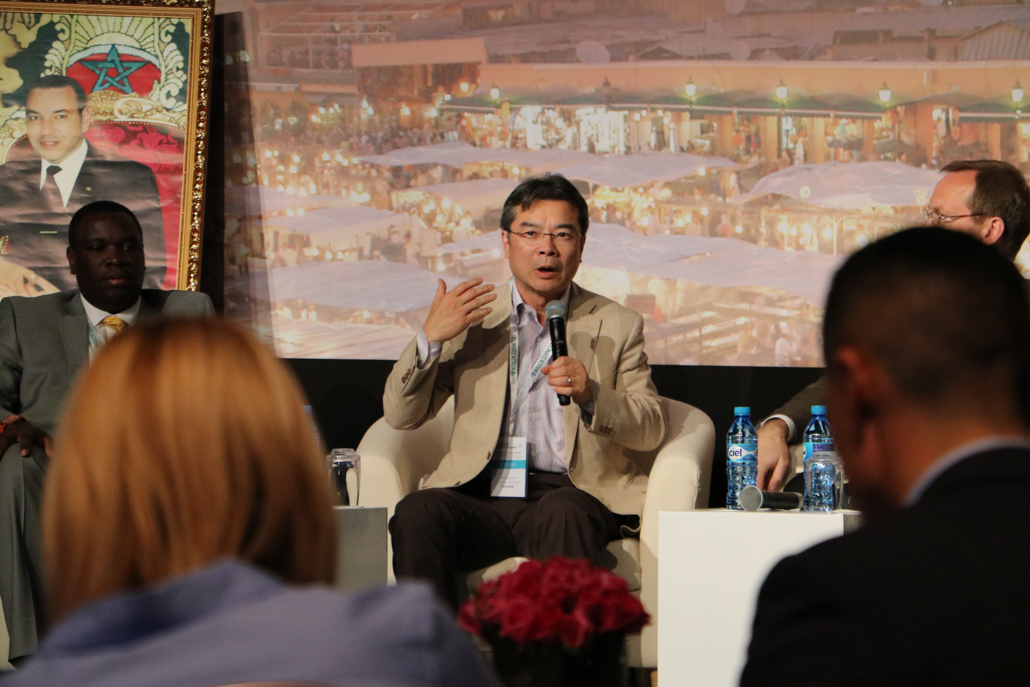 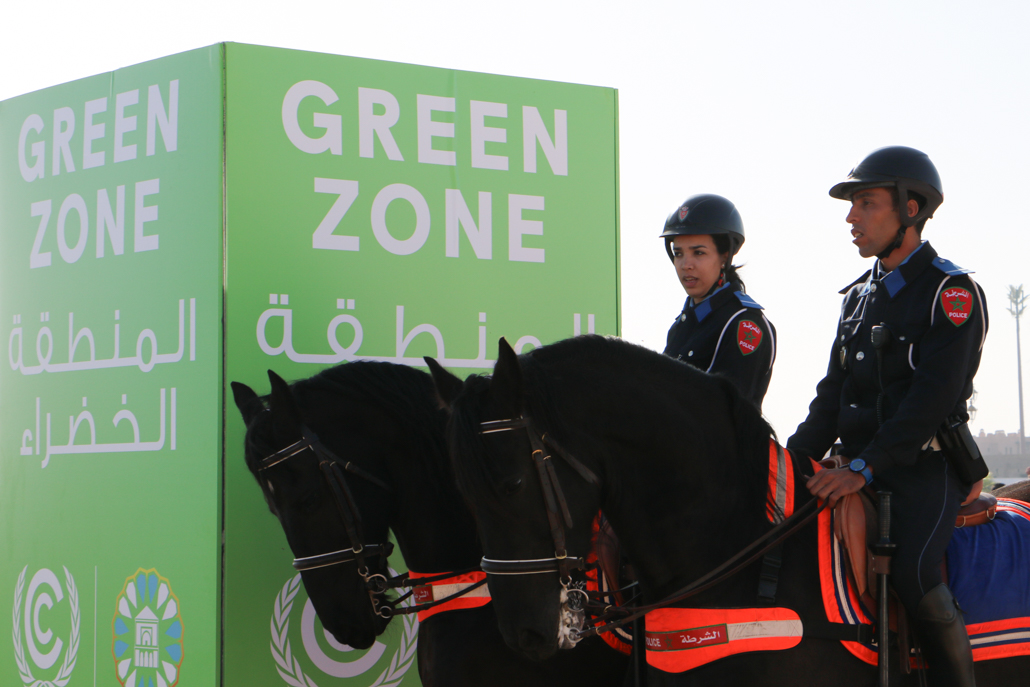 For the second consecutive year, Peace Boat and the Ecoship Project participated in the annual Conference of Parties to the United Nations Framework Convention on Climate Change (COP). The 22nd Session (COP22) took place at Bab Ighli, Marrakech, Morocco from 7-18 November 2016. Over the two weeks, Peace Boat presented its activities in the two exhibition areas; the Blue Zone and the Green Zone. A side event was organized by Peace Boat to explain its work promoting the UN Sustainable Development Goals (SDGs) around the world and a press conference to introduce the Ecoship and some of the educational programs carried out on board its global voyages. In addition, the director and founder of the organization, Yoshioka Tatsuya participated in the 7th Sustainable Innovation Forum (SIF16), the largest business-focused event held during COP, on November 15.

Throughout the event, Peace Boat had a booth in the Green Zone, where delegates at COP 22 came to learn about the NGO activities and about the Ecoship Project to build the world’s greenest cruise ship. Thanks to a collaboration with Citizens’ Alliance for Saving the Atmosphere and the Earth (CASA), Peace Boat had another point of information in the Blue Zone during the first week. The Blue Zone is the venue for all official activities of the COP 22 during the two-week conference. It is placed under the authority of the United Nations and only accessible to registered participants nominated by the Parties and admitted observer organizations. The Green Zone is for civil society and other organizations to carry out climate change-related activities and was under the authority of the Kingdom of Morocco.

On November 15, Peace Boat organized a side event in the Green Zone entitled “Action for Climate: Promoting Resilience and the Global SDGs”. International Coordinators, Remy Millot and Chema Sarri, introduced Peace Boat’s activities and its new campaign to promote the SDGs around the world. The campaign was launched in August when the Global Goals logo was painted on the hull of the Ocean Dream, before the departure of the 92nd Global Voyage. Romulo Dantas, the Executive Secretary for Youth Empowerment of the World Alliance of YMCAs, and Minas Rajabi, member of the NGO Palestinian Vision also took part in the event to speak about the experiences of their respective organizations onboard Peace Boat.

On November 16, Peace Boat, in collaboration with the YMCA, organized a press conference in the Blue Zone. Under the title “SDG Education Worldwide Onboard a Ecoship for Climate Action”, it was attended by Yoshioka Tatsuya; Choi Yul, President of Korean Green Foundation; Romulo Dantas from YMCA; and Kathy Jetnil Kijiner, a Marshallese poet and spoken word artist. Yoshioka introduced Peace Boat and the Ecoship “as the only ship in the world traveling with the Global Goals painted on the hull”. He spoke about the intention to use the ship as a “flagship for climate action”.

During the press conference, Yoshioka announced Peace Boat’s collaboration with the Alliance of Small Island States (AOSIS). “Their voice is not amplified enough. We want to use our current ship and the Ecoship to raise awareness on the problems they are facing”, he told to the audience. Representing the Small Island States, Kathy Jetnil Kijiner, from the Marshall Islands, thanked Peace Boat for helping to raise awareness about the situation in the Marshall Islands and other territories affected by climate change. “Island States are particularly vulnerable to the consequences of climate change like the rise in the level of the oceans and the escalation of some extreme weather phenomena”, she explained.

In the same event, Dantas and Choi spoke about some of the current educational programmes. Since 2005, Peace Boat has collaborated with Korea’s largest environmental NGO, the Green Foundation, in order to build new bridges between Japan and Korea, and a peaceful, sustainable future for East Asia, through the organization of “Peace & Green Boat” voyages in the region. Choi explained that the ship offers “a great space for educational voyages and study programs about current issues like climate change”. In 2015, Peace Boat and the World Alliance of YMCAs began a partnership and joined efforts towards their mutual goals of promoting youth empowerment, international exchange and building a culture of peace and sustainability. “We love bringing our ‘Change Agents’ onboard. Peace Boat helps you to think outside the box”, Dantas said. The press conference can be seen here.

During COP22, the Ecoship Project was part of the Sustainable Innovation Forum (SIF16) which took place on 14-15 November. 800 participants including national and local Government ministers, UN agencies, international NGOs, investors, the academic community and private sector came together to meet, network and discuss national climate targets and the drive towards the business innovations and solutions needed in order to achieve the ambitious goals of the Paris Agreement. During the second day of the conference, Yoshioka took part in a session called “Impacting Innovation: Accelerating Green Economy Growth”, where he introduced the Ecoship Project to the audience. Others speakers of the event included the Executive Director of the UNEP, Erik Solheim, and the Solar Impulse chairman, Bertrand Piccard.

The 23rd edition of the Conference of Parties (COP23) will be organizers by Fiji, the archipelago of the Pacific. The actual conference will take place in Bonn, Germany because of logistical difficulties of accommodating up to 20,000 people on one site. Bonn is the seat of the headquarters of United Nations Framework Convention on Climate Change (UNFCCC), under whose auspices international negotiations among more than 190 countries will be taking place. COP23 will be the first time that a small island State, one of the countries most affected by climate change will organize a Conference of Parties to the United Nations Framework Convention on Climate Change.