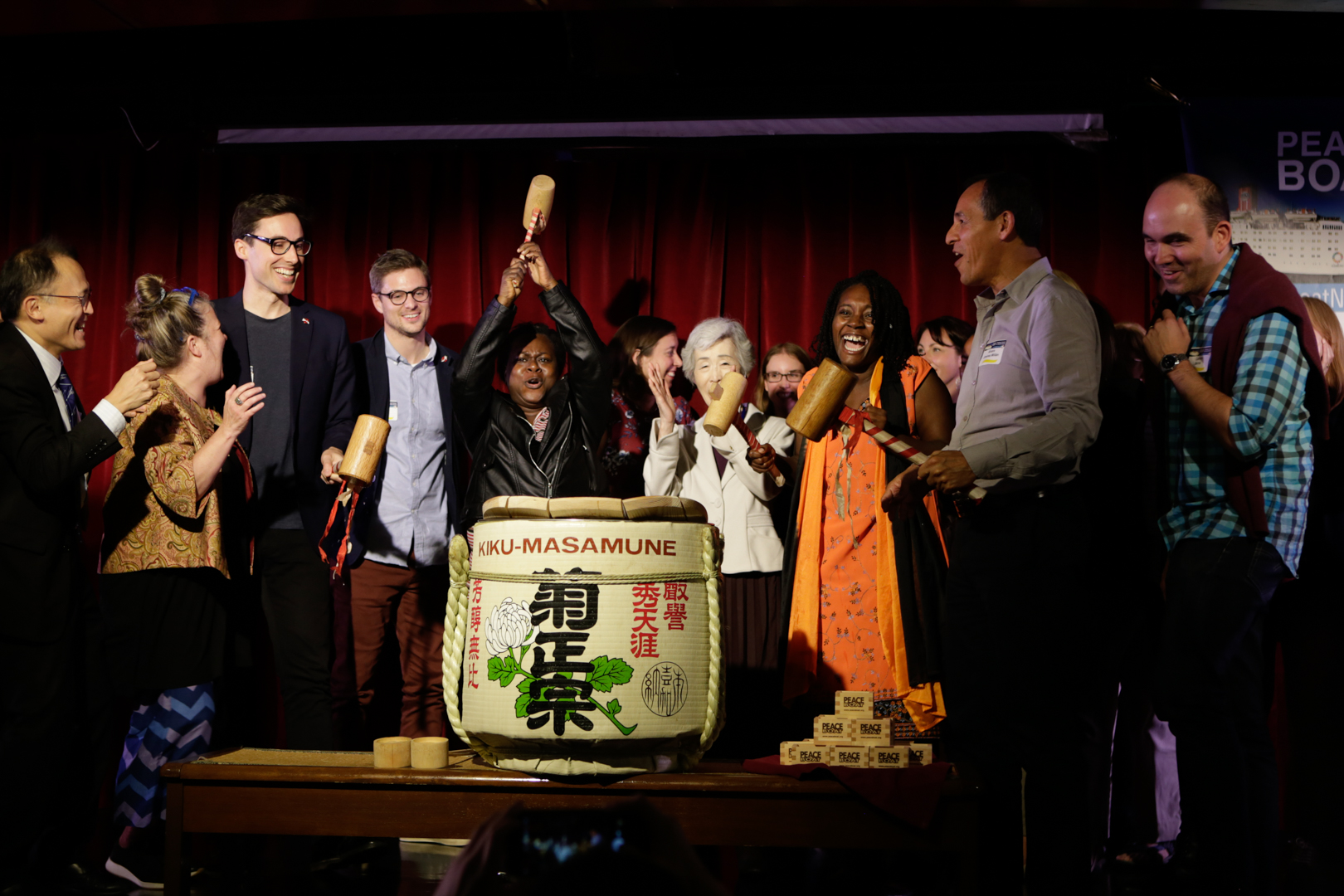 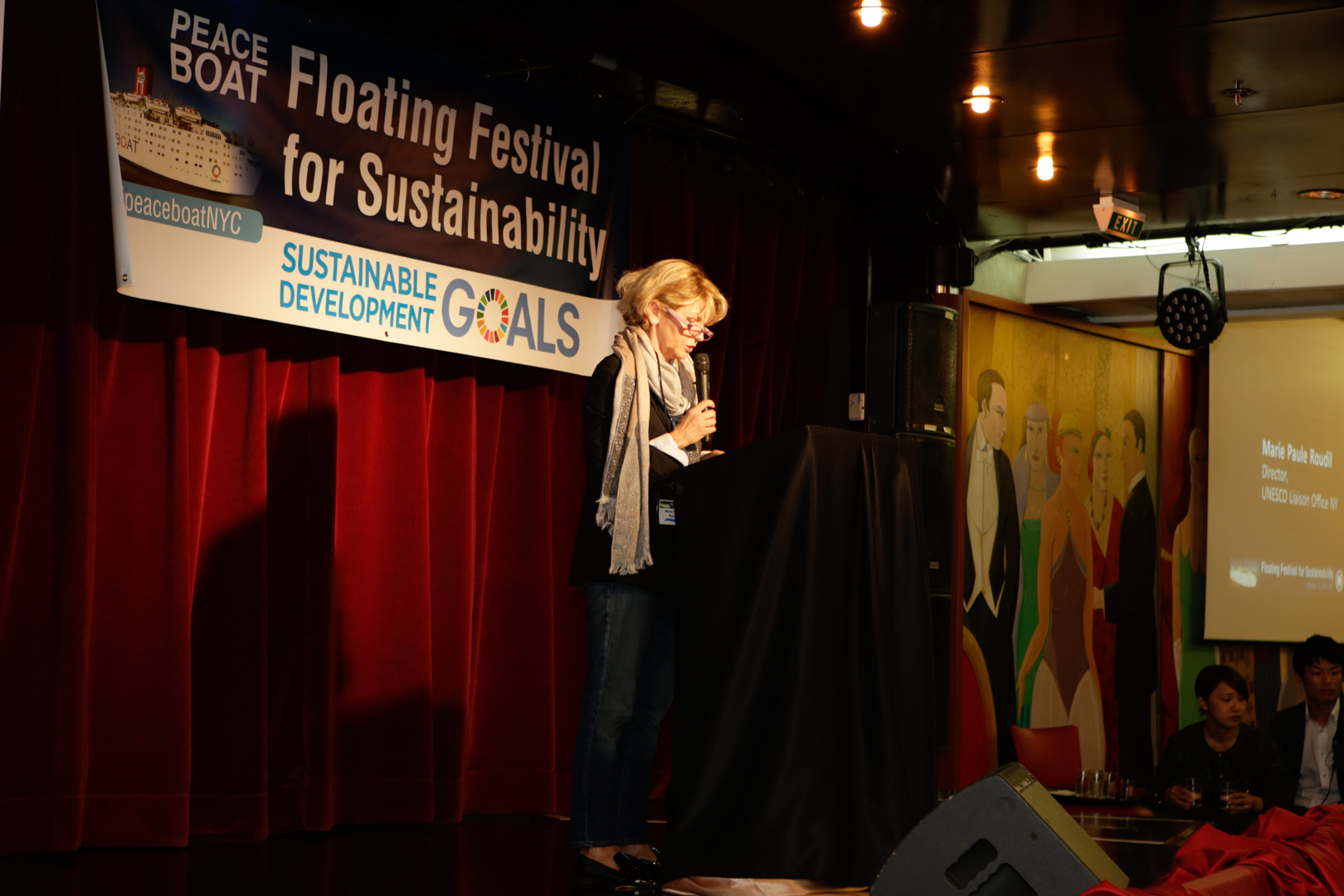 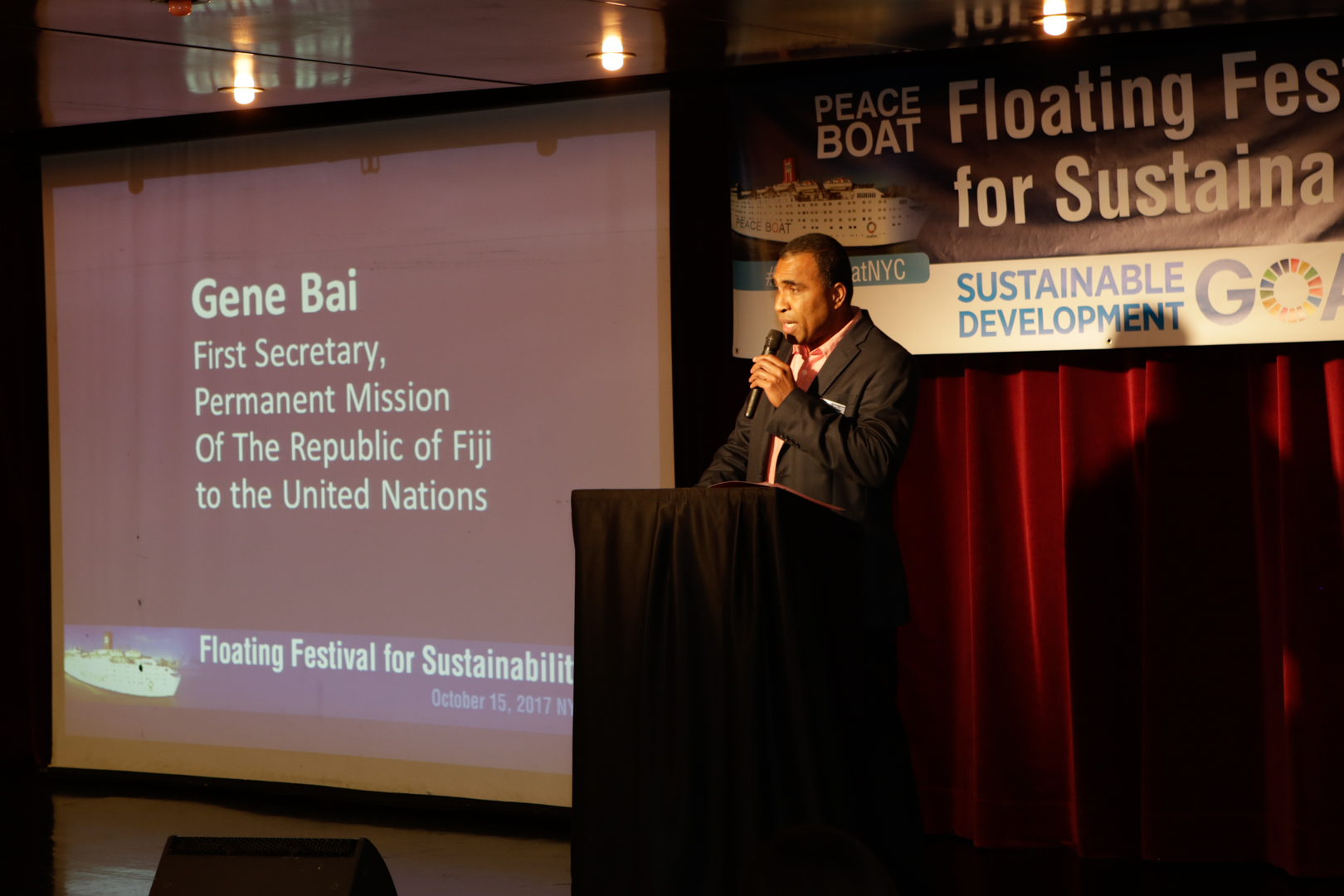 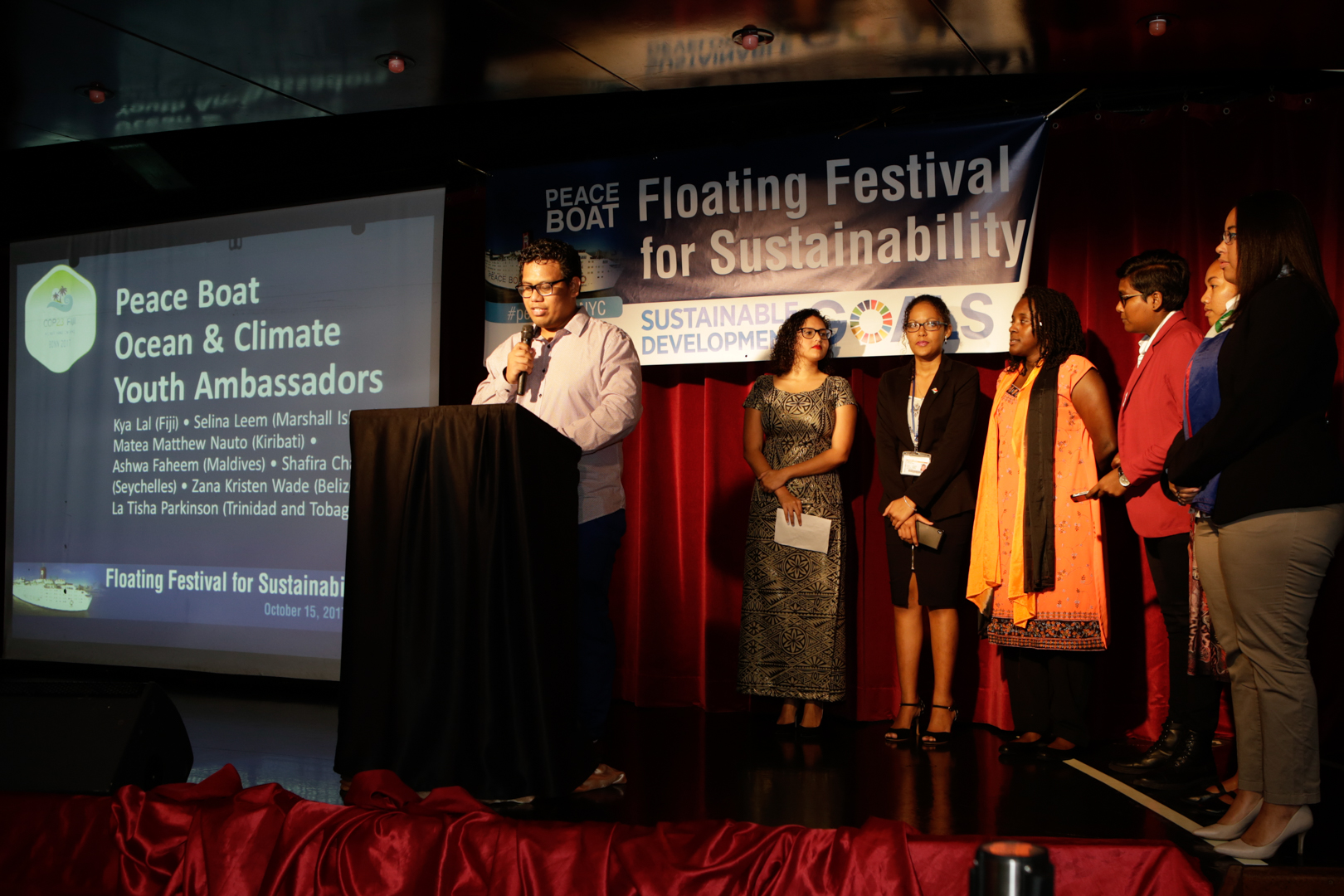 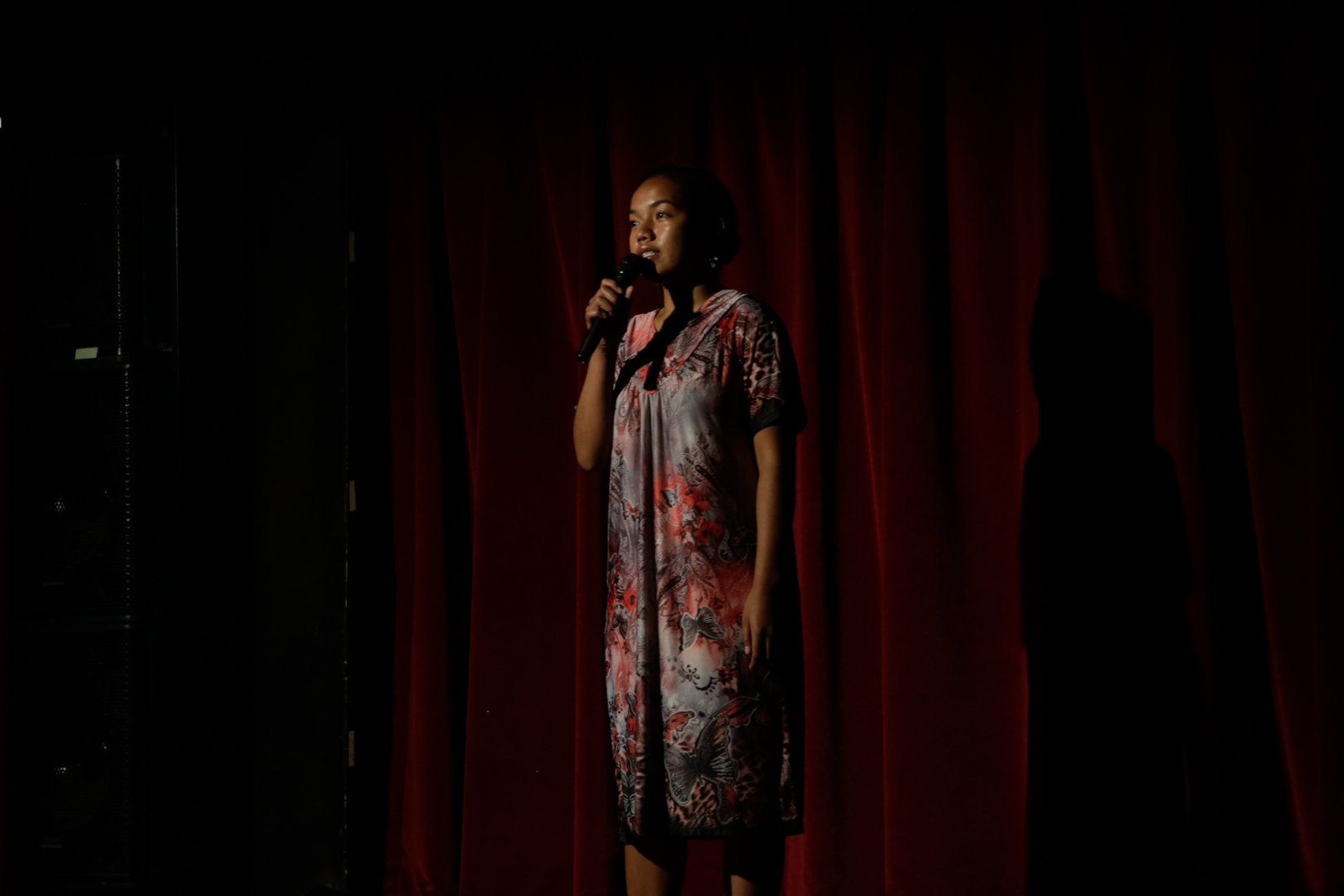 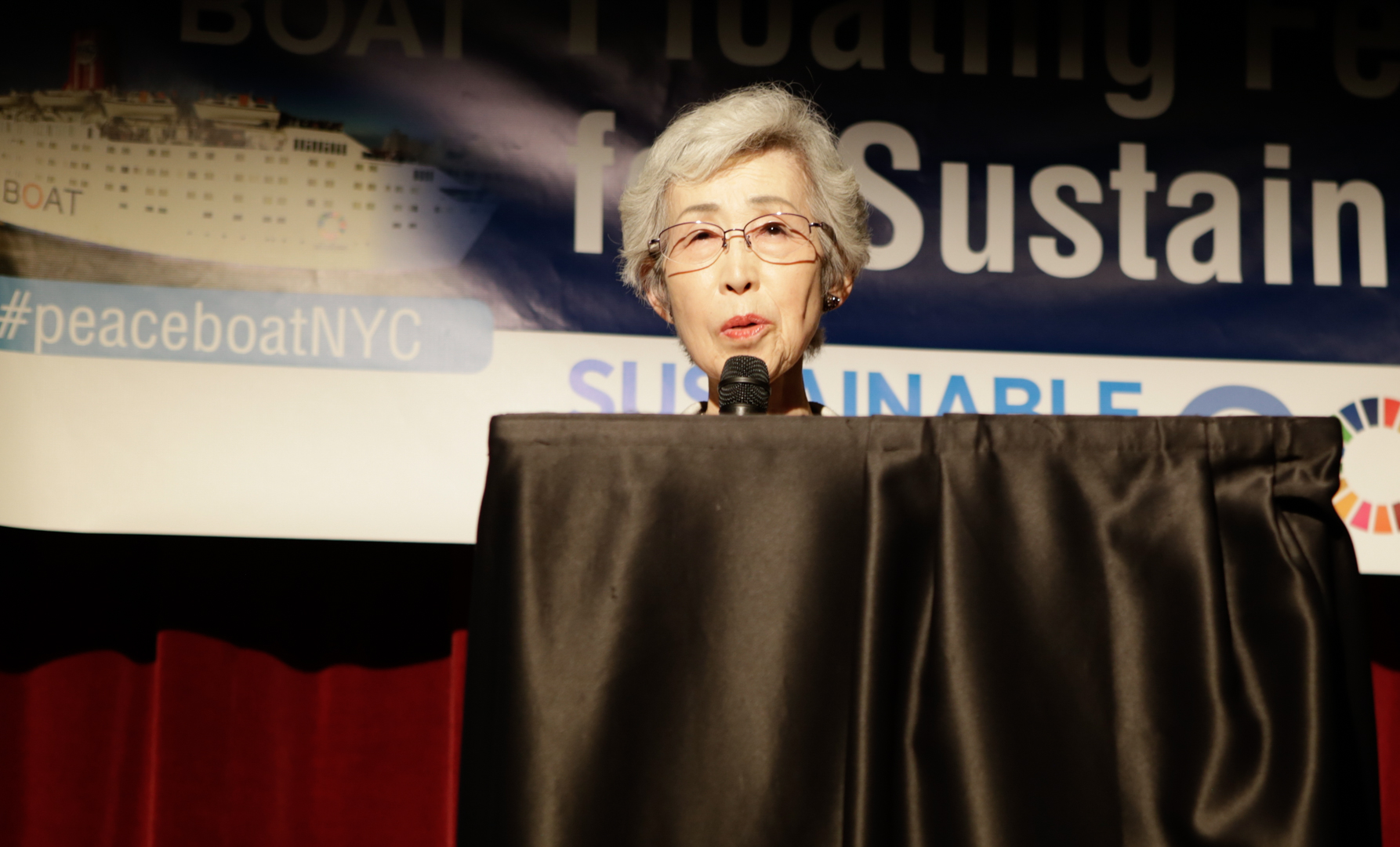 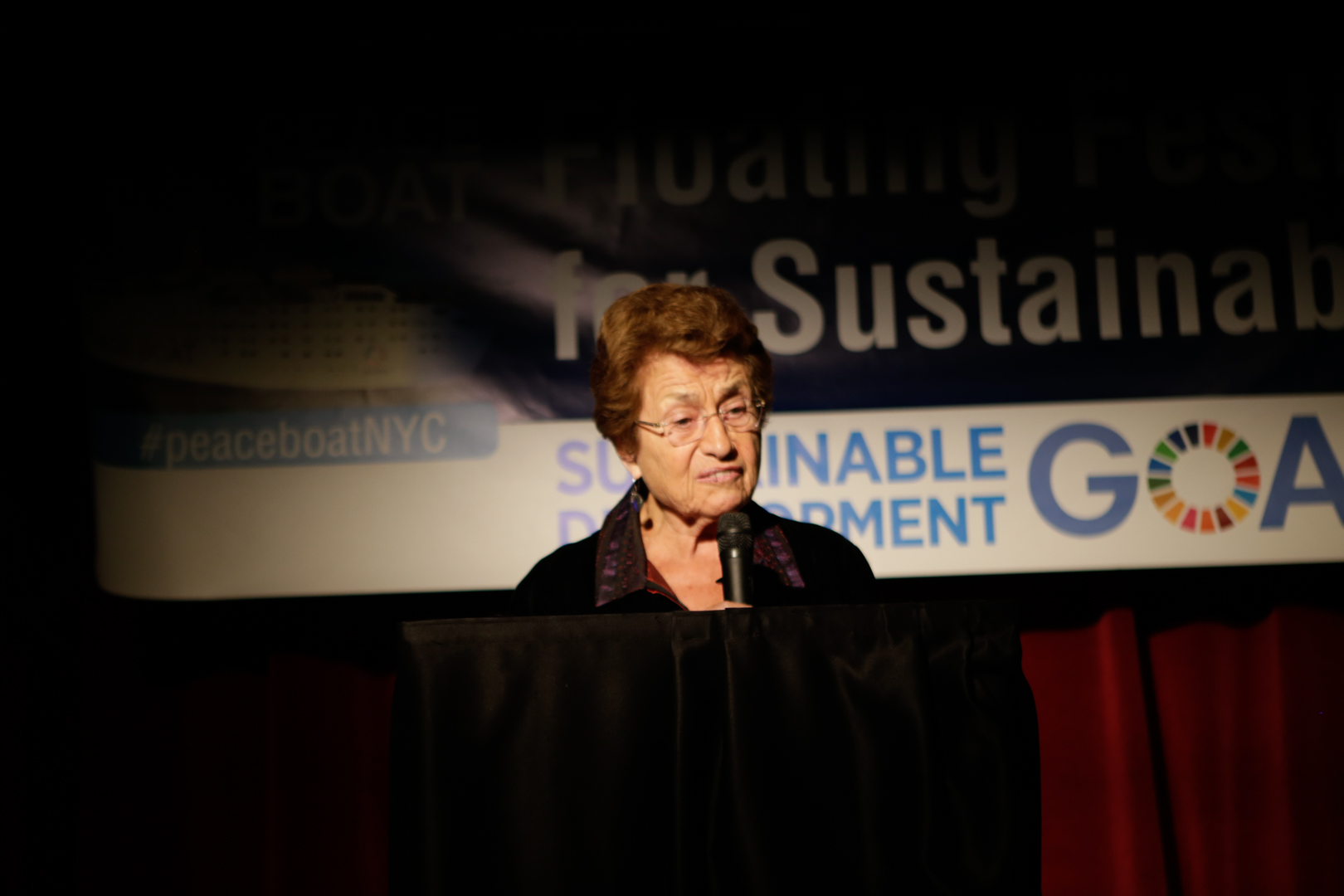 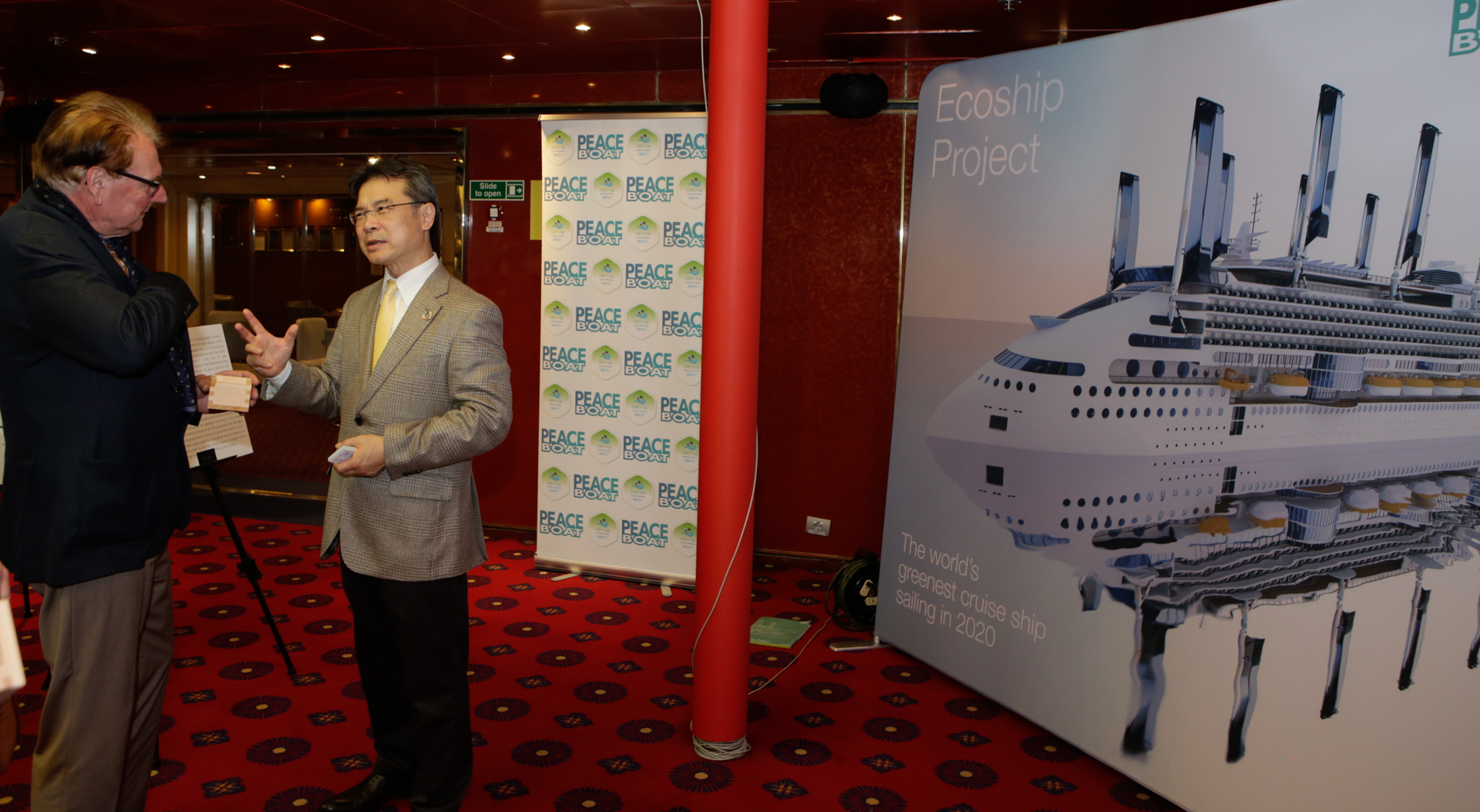 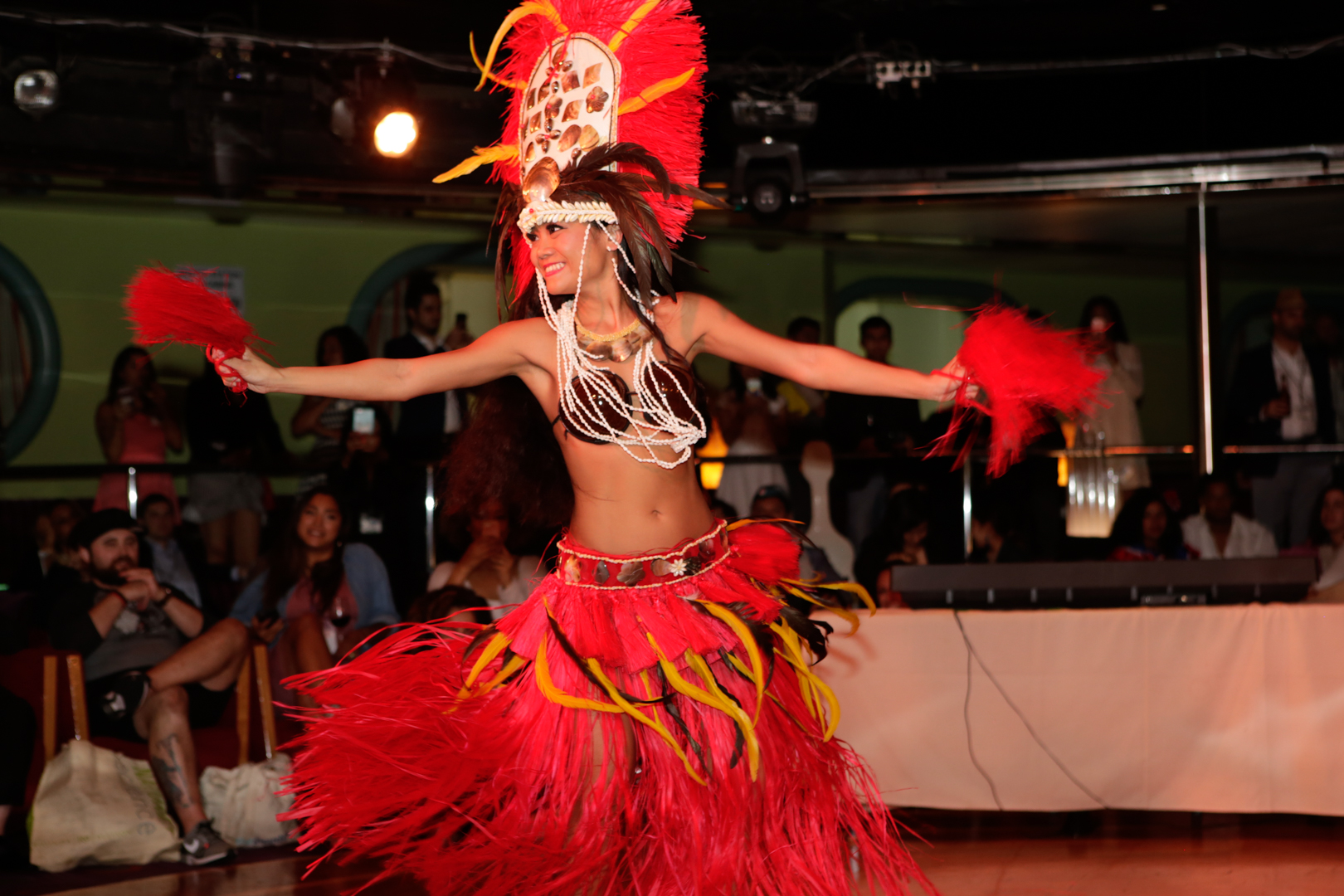 On October 15, Peace Boat returned again to New York with The Floating Festival for Sustainability, a celebration of the Sustainable Development Goals, and the importance of education, partnership and youth engagement. The links between peace and sustainability, and oceans and climate, were highlighted by a diverse range of speakers and performers, including the Peace Boat Ocean and Climate Youth Ambassadors.The event culminated in a special celebration of the awarding of the 2017 Nobel Peace Prize to the International Campaign to Abolish Nuclear Weapons (ICAN), whose International Steering Group Peace Boat is part of. It celebrated Peace Boat’s partnerships in the United Nations community and civil society and played an important role in Peace Boat’s outreach and awareness raising as a campaigner for the Sustainable Development Goals.

After a welcoming by Peace Boat Founder and Director, Yoshioka Tatsuya, Master of Ceremonies, Takahashi Maho welcomed to the stage, keynote speaker Ms Marie Paule Roudil, Director of the UNESCO Liaison Office New York. A trained lawyer, Ms Roudil has a long and distinguished career within the United Nations, including working in the final stages on the negotiations that led to the adoption of the Convention on the Protection of the Underwater Cultural Heritage.Ms. Roudil expressed that she was surprised and pleased to see so many people gathered on a Sunday evening to celebrate peace and sustainability. She stressed the need for all members of society the world over to work towards the 2030 Agenda in the short time remaining. With SDG14 a particular focus of the Festival for Sustainability, Ms. Roudli called attention to the proposal from The Intergovernmental Oceanographic Commission of UNESCO (IOC) and its partners for 2021-2030 to become the International Decade of Ocean Science for Sustainable Development and thanked the Permanent Mission of Fiji for their support for the initiative. She also invited Peace Boat to collaborate with UNESCO in building ocean literacy across the world.

When docked in New York, Peace Boat’s ship not only had Global Goals logo painted on the side of the hull, but also the flag of COP23, the United Nations climate change conference to be held in November on the side of the ship. As a committed campaigner for the UN Sustainable Development Goals highlighting the connections between peace and sustainability, as well as climate and oceans, Peace Boat was honoured to welcome a representative of Fiji, the President of this year’s UN Ocean Conference and COP23.Mr. Gene Bai, First Secretary of the Mission of Fiji to the United Nations took to the stage to speak about the achievements of the Ocean Conference which took place in June including a 14 point Call to Action adopted by consensus amongst the member states. He thanked Peace Boat for submitting the very first voluntary commitment from an NGO for the implementation of SDG14, which was submitted for the Ecoship Project.

Taking note of Fiji’s leadership role in United Nations peacekeeping activities, Mr. Bai told those gathered that “There is no escaping the fact that climate change is as great a threat to global security as any cause of conflict”. For this reason, Fiji is working so hard towards climate action with its Presidency of COP23. Mr. Bai said “We are going to do things in Bonn differently”. The talks in the formal Bula Zone will be infused with the Fijian spirit of Talanoa which according to Mr. Bai ‘form of dialogue based on trust, empathy and the collective good’ which was responsible for so many of the successes of the Ocean Conference. He also emphasised the need for a “grand coalition” for the implementation of the Paris Agreement saying that all sectors of society are needed to push the agenda forward and will be represented in the Bonn Zone. Peace Boat as a member of civil society will be exhibiting and presenting in the Bonn Zone as part of this grand coalition.

The Ocean and Climate Youth Ambassador Programme was Peace Boat’s second Voluntary Commitment to SDG14 and a flagship programme of the 95th Global Voyage. Announced at the Ocean Conference and aimed at building momentum towards COP23, seven young leaders from small islands developing states (SIDS) joined the voyage from Barcelona. Referring to themselves as from Large Ocean States, the seven youth ambassadors took to the stage in the Floating Festival to report on the programme. Kya Lal from Fiji expanded on the words of Mr. Bai and spoke about the role of the ambassador programme in building momentum for COP and the collaboration between the presidency and Peace Boat and the UNFCCC. La Tisha Parkinson of Trinidad & Tobago reported on the activities in the ports they had visited while Shafira Charlette spoke about the activities onboard the ship with the guest educators. This part of the event was introduced by Matea Nauto of Kiribati with support from Zana Kristen Wade of Belize. Following a video of the activities during the programme, the photojournalist Ashwa Faheem spoke about the power of photography to raise awareness of the issues of climate change and degradation and Selina Leem moved the audience to tears with a performance of a poem about the double catastrophe of climate change and nuclear testing. Their presentation finished with their Youth Call to Action. It was followed by Peace Boat Director and Founder introduction to Peace Boat’s first voluntary commitment to SDG14, Ecoship as Peace Boat’s concrete action for climate change and ocean degradation. Ecoship will be the platform for future programmes like the Ocean and Climate Youth Ambassador Programme. The Ambassadors to the United Nations of Kiribati, H.E. Mr. Teburoro Tito and Trinidad & Tobago, H.E. Ms. Penelope Beckles, as well as representatives from the Permanent Mission of the Marshall Islands attended to the hear the young leaders from their countries speak.

The humanitarian impact of nuclear weapons continued as a theme in the second part of the programme. DJ Spooky aka Paul Miller introduced the Peace Symphony he composed onboard Peace Boat following his encounter with Hibakusha onboard the 83rd voyage. Director of the Global Voyage for a Nuclear Free World: Peace Boat’s Hibakusha Project, and ICAN International Steering Group Member, Kawasaki Akira took to the stage. He paid tribute to all those who had been campaigning for the abolition of nuclear weapons which had resulted in the United Nations Treaty for the Prohibition of Nuclear Weapons. He congratulated those states who had already signed the treaty and called on all remaining states to do so. “If nuclear weapons were to be detonated today, it would cause catastrophic climate change”. Kawasaki Akira said he hoped that the award of the Nobel Peace Prize would encourage other states to sign. Disarmament Educator and partner of the Hibakusha Project, Kathleen Sullivan called the Hibakusha “spiritual leaders and inspiration to the ICAN campaign”. Following this introduction, survivor of the Nagasaki atomic bombing Ms. Kimura Tokuko, currently travelling onboard Peace Boat’s 95th Global Voyage, took the stage. Ms. Kimura was 10 years old when she was exposed to the bomb, and spoke about her experiences that day and how she had continued to be haunted by the long term effects of radiation on herself and her family including the following generations. “This is the true horror of nuclear weapons and what makes them different from other weapons” she told the audience. Ms. Kimura ended by saying that she was honoured by the attention to the cause of the Hibakusha highlighted the award of the Nobel Peace Prize to ICAN.

The closing remarks for the evening came from a leading figure in the movements for peace, disarmament, gender equality and social justice over many years, Cora Weiss, President of the Hague Appeal for Peace. She spoke about the twins of catastrophe of climate change and nuclear weapons and said that sustainable peace can only be achieved by a new collaborative peace agenda. She said “it is time to abolish war and promote peace and justice”.

The main event was brought to a close when the members of ICAN, including staff Tim Wright and Daniel Hogsta, were invited onto the stage for a special traditional Japanese celebration called the “Kagamibiraki”, breaking open a barrel of sake in celebration of the Treaty for Prohibition of Nuclear Weapons.

The main event in Broadway was followed by an evening of music featuring live performances by guest artists, followed by talented DJs playing in the Starlight Lounge. Guests onboard were invited to use to build new friendships and celebrate the UN Sustainable Development Goals together towards future collaboration. The guests were welcomed by VJing of the SDGs Videos and Piano solo by Mikauk Rai. Performers included guitarist and composer Shiro Otake, and an SDGs Music & Dance ensemble featuring youth from the Dominican Republic. The islands theme was continued with performances from Sandii, well-known Japanese performer and ‘Uniki Kumu Hula’ (possessor of traditional hula knowledge) with hula dancer and instructor Laea Marilyn. The festivities continued with DJs Carlos Chiesa & Pablo Cortes and VJ Genki Nishida.

Throughout the whole Floating Festival for Sustainability event, the main deck area of Peace Boat’s ship was given over to the SDG Innovation Lounge. It was a space to showcase innovative projects highlighting the 2030 Agenda for Sustainable Development, otherwise known as the United Nations Sustainable Development Goals (SDGs) and featured exhibits from the United Nations including the winners of the UN Office for Disarmament Affairs (UNODA) Peace Poster competition, civil society, the arts and the private sector which are connected to many of the 17 Sustainable Development Goals, with special emphasis on Climate Action (13), Under Water (14) and Peace and Justice (16).Featured artists and civil society organisations included SEAing Breath, Sustainable Fashion featuring Keeper and Made by Voz, Solare, Peace Accelerators, Protect Yo Heart, Uncuttart, She Worx, Give Me Tap, Global Green / Friendship Foundation and Movement in Water. Each contributed in their own way to raising awareness of the Sustainable Development Goals with their commitments to different SDGs and the 2030 Agenda.