Ecoship opens the voluntary commitments of the Ocean Conference 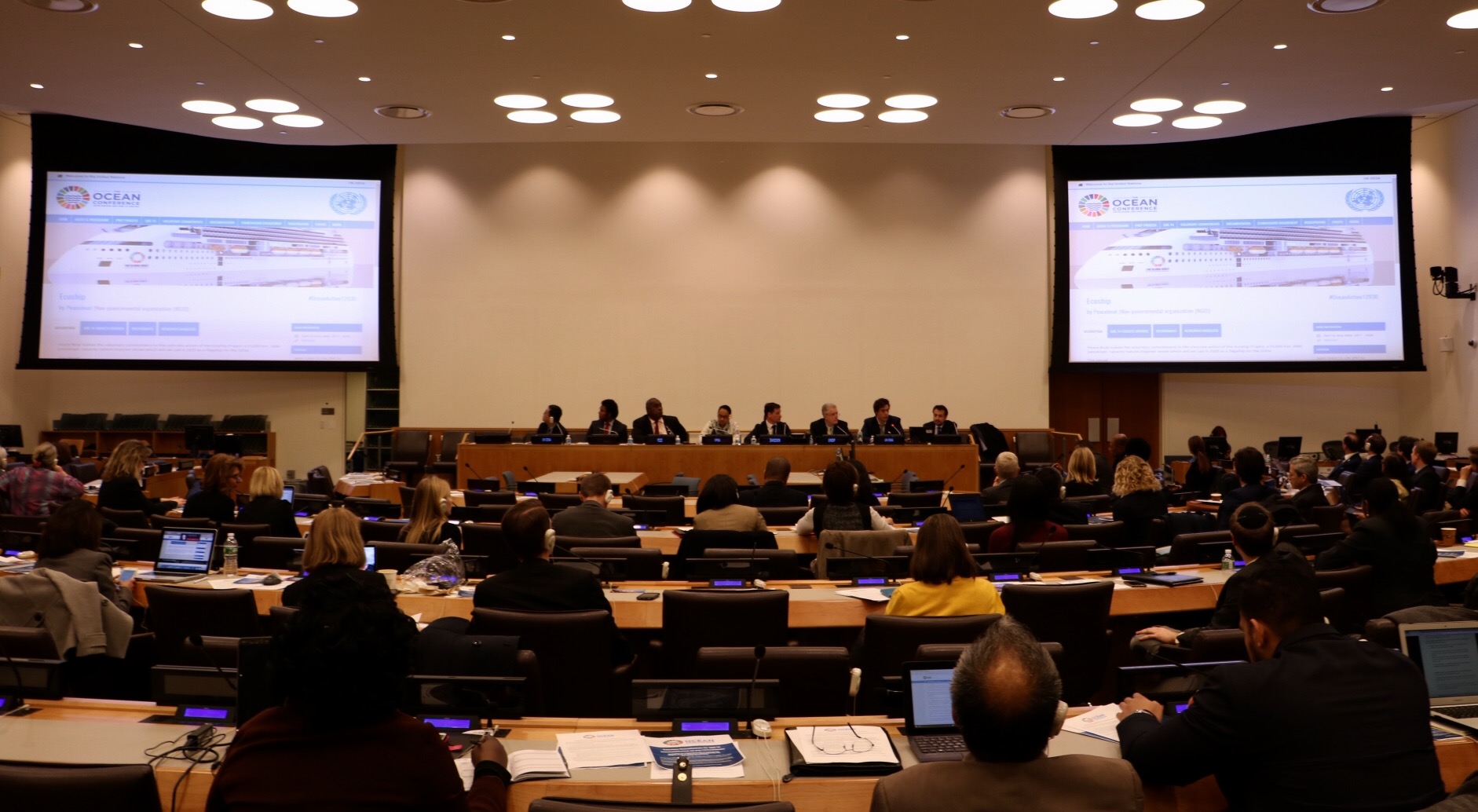 Peace Boat’s Ecoship was announced at the Special event on the launch of the voluntary commitment process for the Ocean Conference as one of the first three voluntary commitments for SDG 14, together with those from the Government of Sweden and the United Nations Environment Programme (UN Environment). Peace Boat’s Ecoship Project is the first to be introduced by a non-governmental organization.

At the event held on February 15 at United Nations headquarters as part of the preparatory meeting for The Ocean Conference, the registry of voluntary commitments was launched online featuring Ecoship as one of the first examples. Peace Boat Director, Yoshioka Tatsuya stated, “to achieve the SDGs, commitment on all levels, from grassroots to governments and the United Nations, is necessary. We are proud to be one of the first to join this global wave of action and hope that our commitment will help to build more partnerships and inspiration to act. These results have the potential to catalyze action not only for our oceans but for all of the SDGs.”

Peace Boat makes the voluntary commitment to the concrete action of the Ecoship Project, a 55,000 ton, 2000 passenger capacity nature-inspired vessel which will set sail in 2020 as a flagship for the SDGs. Ecoship’s contribution to SDG14 will come not only through its technology and design but also through its diverse activities. Four annual global voyages will create the framework for hundreds of educational programmes, advocacy campaigns, and applied research, as well as for hosting international conferences and world-class exhibitions on green technologies, climate action, and ocean welfare.

Voluntary commitments for The Ocean Conference are initiatives voluntarily undertaken by Governments, the United Nations system, other intergovernmental organizations, international and regional financial institutions, non-governmental and civil society organizations, academic and research institutions, the scientific community, the private sector, philanthropic organizations and other actors – individually or in partnership – that aim to contribute to the implementation of Sustainable Development Goal 14.

At the Special Event, the Ecoship was presented alongside voluntary commitments from Government of Sweden (one of the Co-Presidents of the Conference) and the United Nations Environment Programme (UN Environment). By 2020, the Government of Sweden commits to conserving at least 10 per cent of coastal and marine areas, consistent with national and international law and based on the best available scientific information. The UN Environment introduced the Clean Seas global campaign on marine litter, which aims to secure commitments from Governments, private sector enterprises and members of the general public.

From now until June 9, all stakeholders are encouraged to register voluntary commitments geared at driving implementation of Sustainable Development Goal 14 and its associated targets in the online registry. A list of voluntary commitments will be produced at the end of the Conference, and be included in the report of the Conference. The Ocean Conference will be convened at United Nations Headquarters from 5 to 9 June 2017.