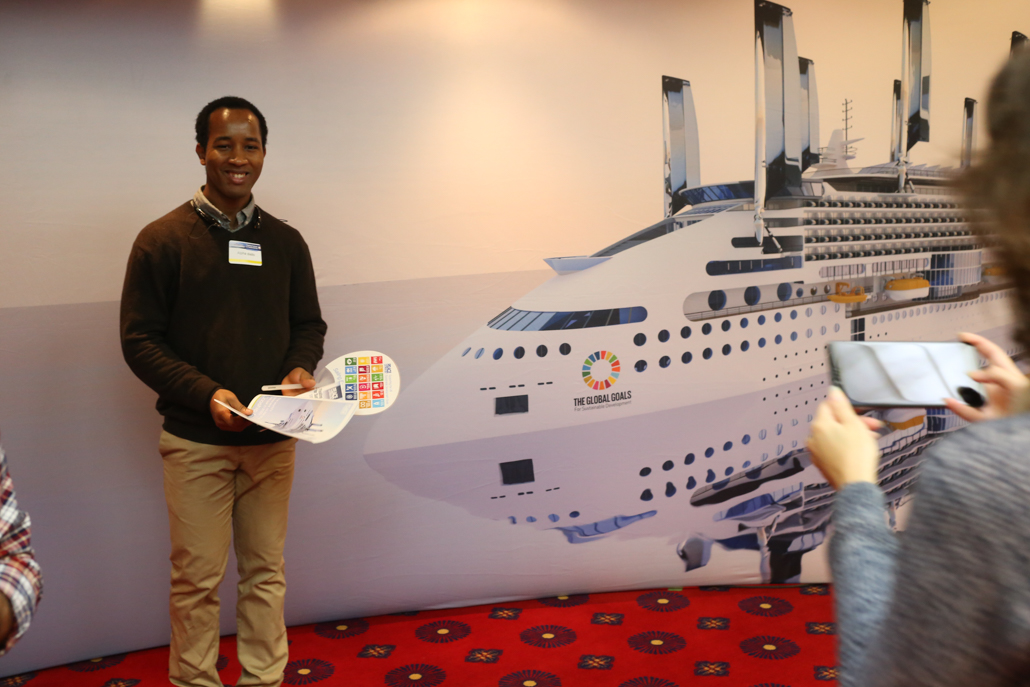 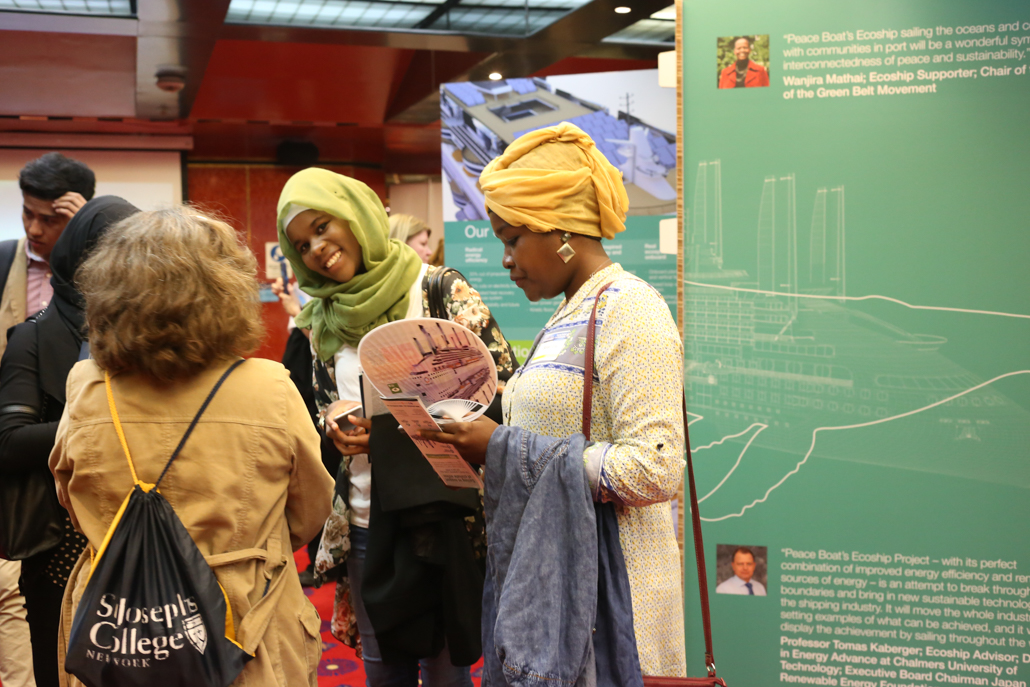 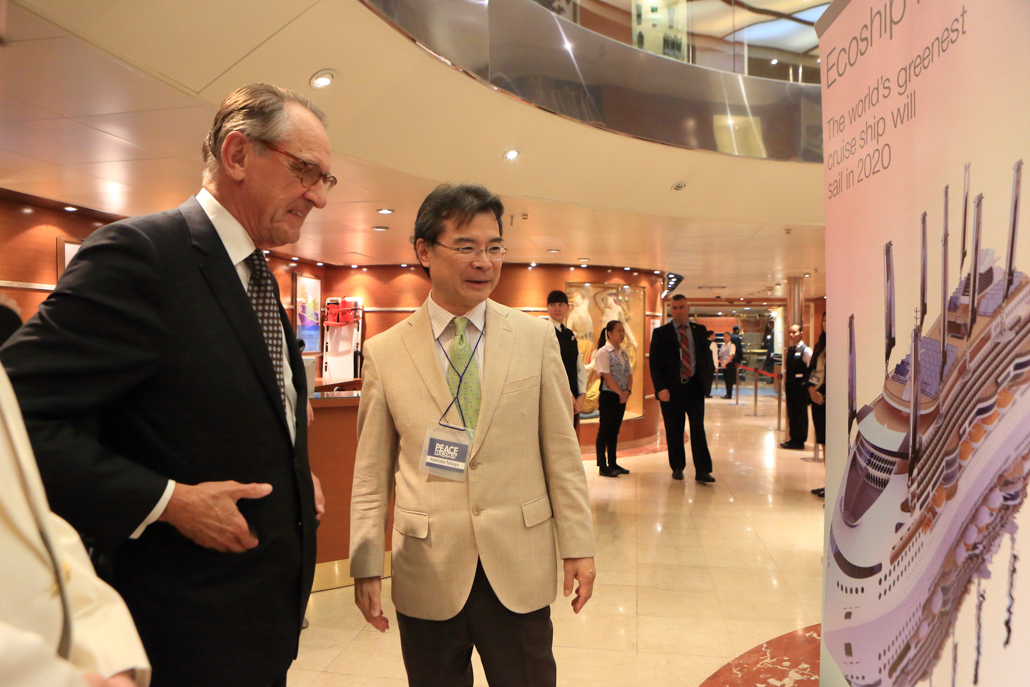 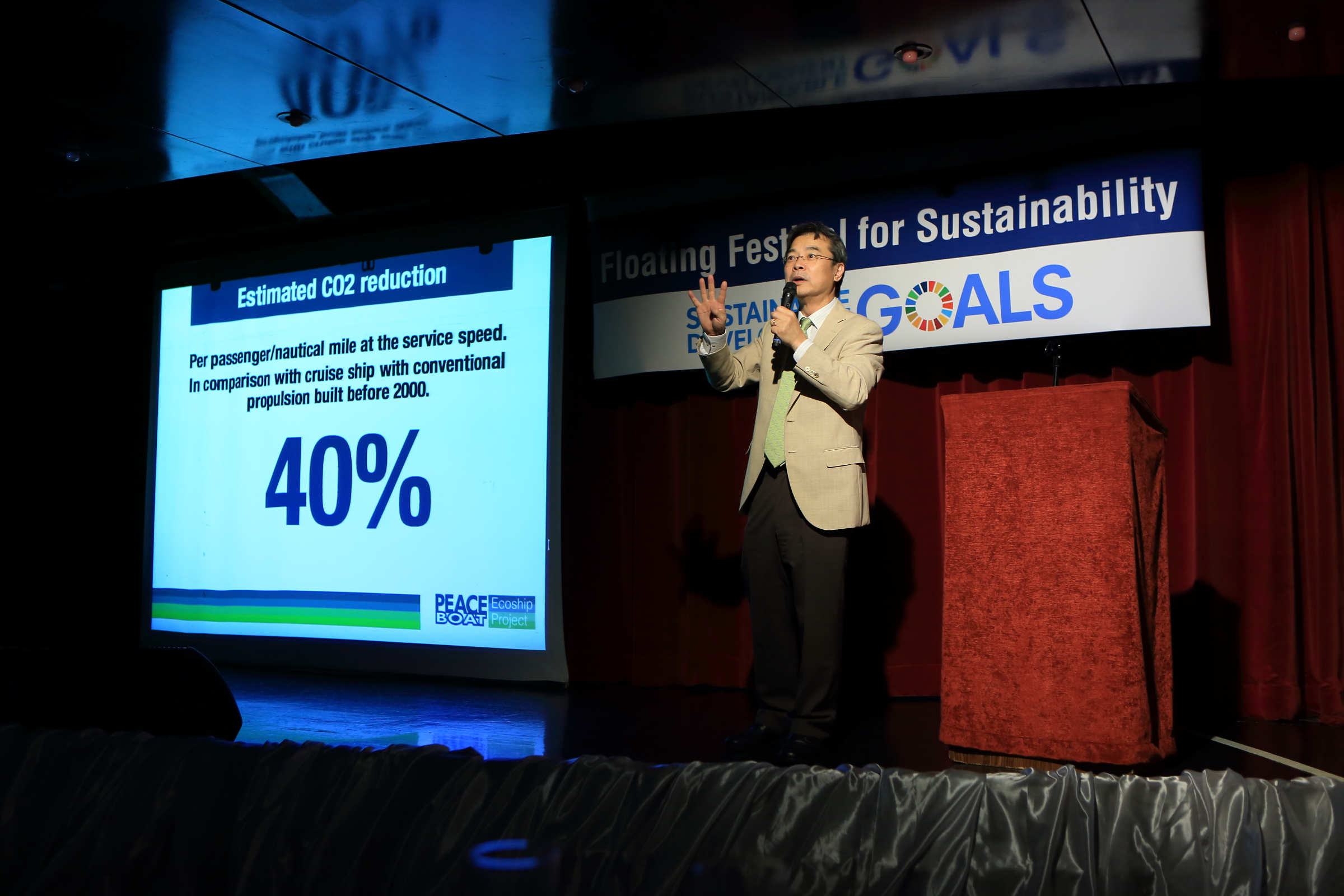 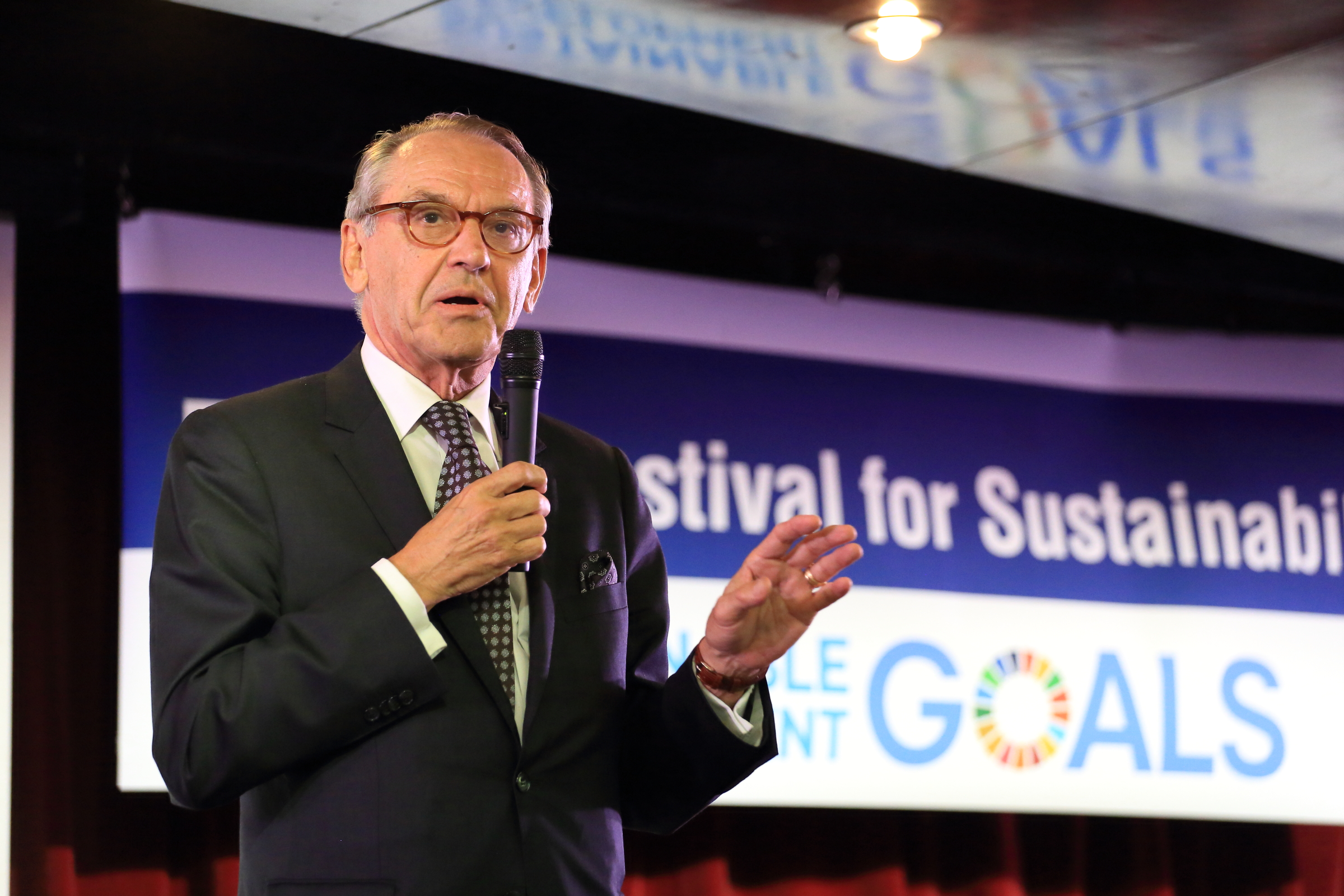 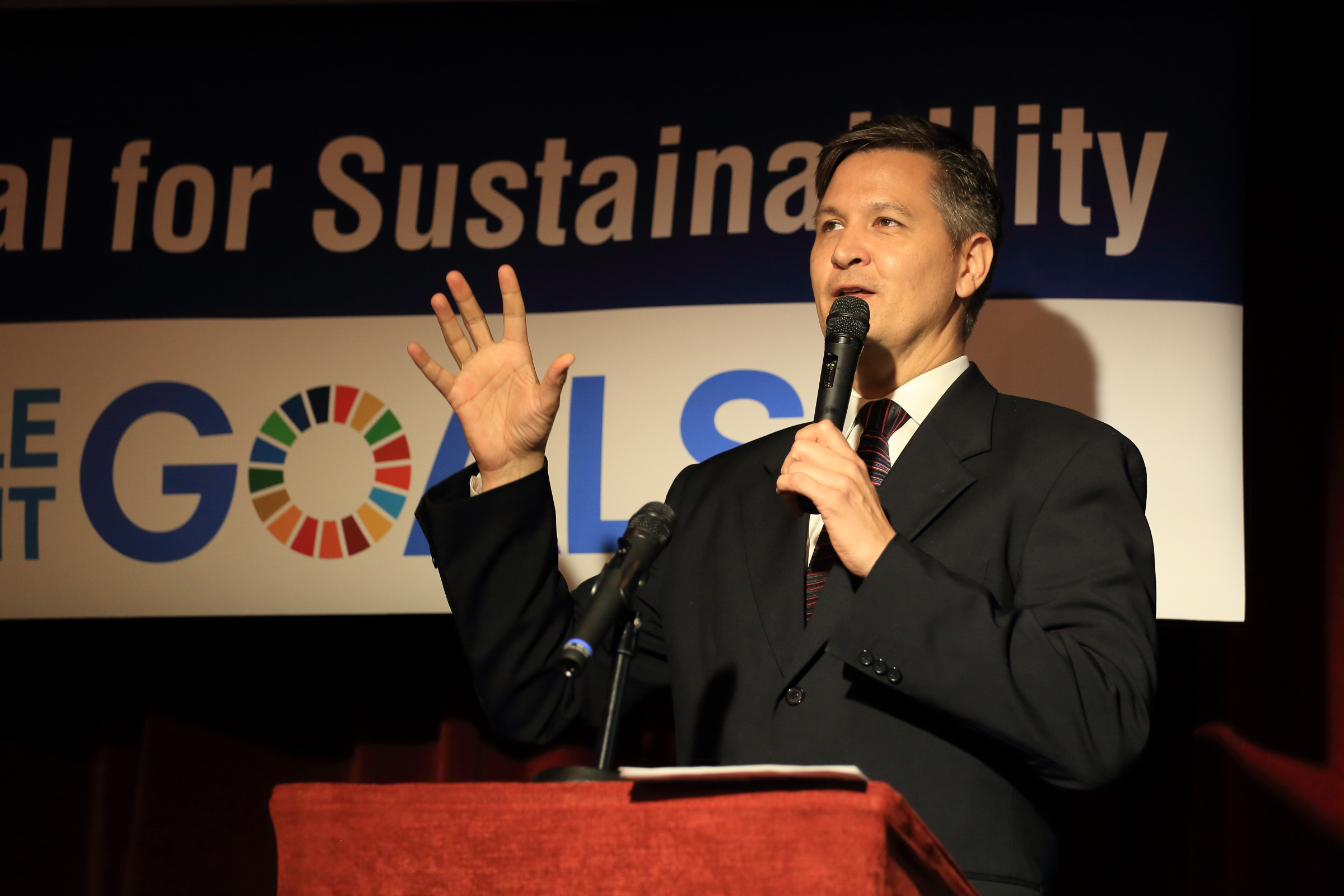 After two days docked in New York City, Peace Boat is continuing its 92nd Global Voyage to promote the United Nations 2030 Agenda. On 20 October, a “Floating Festival for Sustainability” was organized with the UN Department of Public Information (DPI) onboard to support the Sustainable Development Goals (SDGs). Over 600 people gathered on the ship to celebrate partnership between the UN, the private sector and civil society to achieve these goals, the logo of which is painted on the ship’s hull.

Keynote speaker at the event was Deputy Secretary-General of the United Nations, H.E. Mr Jan Eliasson, who announced, “I am glad to see the SDGs logo on the Peace Boat. You are raising awareness around the world about the ambitious and transformational vision for 2030 among people in more than 80 countries. You are taking action and accepting responsibility. For this act of solidarity we thank you wholeheartedly. Yours is more than a voyage – it is a journey to a better future for all humanity.” Also speaking was Peace Boat Director Yoshioka Tatsuya, who introduced the organization’s Ecoship Project – the world’s most sustainable cruise ship planned to sail in 2020 as a flagship for climate action.

H.E. Mr Ahmed Sareer, Ambassador of the Maldives to the United Nations and Chairman of the Alliance of Small Islands States (AOSIS) also spoke at the event, announcing a partnership to be launched between Peace Boat and AOSIS for initiatives relating to Climate Action in small island States visited during global voyages. Noting the devastation caused by global warming in small island states, a cheque of US$4000 collected by passengers onboard the voyage to launch a campaign to help those affected by Hurricane Matthew was presented to the New York-based group World Cares Center. The Peace Boat Disaster Relief Volunteer Center is now preparing to deploy to Haiti together with the World Cares Center on October 29.

This special evening also included musical and cultural performances, exhibitions and an Eco-Fashion show by sustainability focused local New York designers. Other programmes which took place during Peace Boat’s visit to New York City included a side event at the United Nations on nuclear disarmament in cooperation with the Permanent Missions of Japan and the Marshall Islands to the UN; visits to local community and youth organizations including Global Kids and DCTV; and atomic bomb survivor testimonies at the UN International School and National Sawdust theater in Brooklyn.